Miami during Art Basel is pure Fellini. Picture vacant models and their significantly shorter patrons parading around old factories in edgy parts of town. Picture the slow, interminable parade of rented Bentleys and Rolls Royces crawling across the causeways from Wynwood to the Beach. Picture reality stars knocking back glass after glass after glass of Ruinart champagne not two-and-a-half feet from multi-million-dollar Picassos and Mirós. Picture a Lohan maybe or maybe not having a Hilton beat up at a Spanish hacienda in the middle of an aquamarine bay. Picture Brooklyn art kids decked out in grayscale in a tent on the beach avoiding the great unwashed who’ve actually come to see the art.

Art Basel is not so much a show about art as a shit show adjacent to it. It can be a pretty great time, if you let it – like a life-size Bravo special that plays out in three stupendous dimensions and blazes Technicolor all the long weekend. What you can remember of it at least, between the flutes of bubbly and the mojito highballs.

Even without Art Basel’s help, Miami is surreal enough. It’s hot, for one. Which you’d expect, of course, this being Miami and all. But it’s still December, and it’s still off. Especially when you end up stranded in Miami an extra eighty-something-degree day – blue skies, palm trees blowing, beauties all a-bathing on the bright white sand – because it’s snowing back home and the airports are all boarded up. There’s that feeling you’re not quite in the United States. The light is different, and the vegetation’s all wrong. You’re on a peninsula jutting way, way out into the Caribbean, much closer to Havana and Nassau than to Atlanta. You feel it. The architecture is gorgeously unfamiliar: Art Deco and MiMo angular as a Bauhaus yet curvy as an old radiator, bright white walls with touches of lush Kodachrome, the strange lovechild of Rio and Tel Aviv with a shot of Cuban espresso and a side of soup joumou.

Is Miami a great food city? Not really, I gather. There’s Cuban food and Haitian, naturally, which automatically makes it a city of some culinary interest. Where else in the country can you get vaca frita or doukounou of such quality, in such density, with, perhaps most importantly, such authenticity?

So we went straight from the airport to Versailles (3555 SW 8th Street, Miami) – “The World’s Most Famous Cuban Restaurant” – on Calle Ocho, where we had ropa vieja, vaca frita, a classic palomilla steak, skirt steak with chimichurri, enough plantains and moros y cristianos to survive another year, coconut flan and sweet custard over pound cake, and cortaditos all around. Is Versailles the best Cuban restaurant in Miami? Sources tell me no. After all, it has outposts all over the airport – rarely a good sign. Is it worth a visit? Yes. It’s an institution – a intriguingly gilded, mirrored, forest green one at that. Early on a Friday afternoon in December, you have the tourists, but you also have the elderly Cuban men silently sipping espressos in their guayaberas, two elderly Cuban ladies three-quarters of a way through a bottle of white, crowds in the bakery eating flaky guava-filled pastries over animated conversation, families pounding boliche and picadillo like there’s no tomorrow.

And in Miami Beach, on Sunday morning, we walked to Cuban restaurant Puerto Sagua (700 Collins Avenue, Miami Beach), a refreshingly low-key, diner-like restaurant in the heart of showy South Beach, where we had a tamal, more ropa vieja, and a large Cuban sandwich.

A decade ago, I tried Haitian restaurant Tap Tap (819 5th Street, Miami Beach). I remember it being delicious, fascinating, and intensely spicy with all that Scotch bonnet. Time prevented me from going back this time, but one of my two Bravolebrity sightings suggests it’s still a place worth trying (here, here).

But the rest of the city is models and actors and athletes and those who cater to them and those who want to be them and those who want to do them and those who fawn over their often dubious celebrity. So you have your scene restaurants, both the well regarded (Daniel Boulud’s DB Bistro, Nobu) and those that just feature neon lights, paparazzi on demand, and uninventive, vaguely tropical fare at champagne prices. The closest we came to that was lunch at SushiSamba (600 Lincoln Road, Miami Beach), a Bebel Gilberto-tinged study in orange and yellow that hasn’t changed a bit in ten years, a Brazilian-Japanese fusion concept with passable nouveau sushi and even better people watching.

Being by the ocean, we mostly stuck to seafood. Friday night, we ate at A Fish Called Avalon (700 Ocean Drive, Miami Beach), a 20-year-old restaurant which is overpriced but maybe worth it to spend a few hours in the lobby or on the patio of one of Miami Beach’s most classic Art Deco structures. An appetizer of charcoal-grilled octopus with white balsamic vinaigrette and pickled onion was rather good. A seafood risotto and a crab-crusted grouper with spinach, white beans, roasted tomatoes, and a Madeira beurre blanc were decent if not revolutionary and served in large portions. But that almost seems characteristically Miami: oversized and consciously elegant without pushing boundaries. A slice of key lime pie finished off the meal.

A more interesting dinner was had the following night at Florida Cookery (1545 Collins Avenue, Miami Beach), an out-of-the-way dining room tucked into the second floor of the James Royal Palm Hotel. The restaurant serves “regional Florida Fare with a focus on locally sourced ingredients,” an unusually slow food concept for Miami Beach, and was built by an acclaimed chef – Kris Wessel – with deep South Florida roots. (Wessel has since left the restaurant.) The eatery was inspired by a 1948 cookbook of the same name. Again, we stuck to seafood: a paella for two featuring local seafood (octopus, clams, shrimp, fish) and a house-made sausage. While the paella didn’t have the crusty bottom – the socarrat – you find in traditional Catalan and Valencian preparations, the seafood tasted incredibly fresh, the rice was perfectly cooked, and the entire dish was flavorful and well-seasoned. The charred octopus and succulent shrimp were especially wonderful, and the sausage was very good though wasn’t nearly enough of it. Though the paella is meant for two, it’s huge. Our waiter confirmed that only maybe one out of eight pairs actually finish it. (Sadly, there’s no t-shirt prize or photo on the wall if you do eat it all.) The best part of the meal was a special that evening: a creamy potato soup of incomparable depth and texture. Cocktails were tropically-inspired but composed and though-through, without the usual sweetness. I had the Janeiro – Bacardi rum, acai liqueur, fresh-squeezed lime juice, guanabana purée, and Prosecco – which left an elegant tartness on the palate which balanced out an otherwise heavy meal. 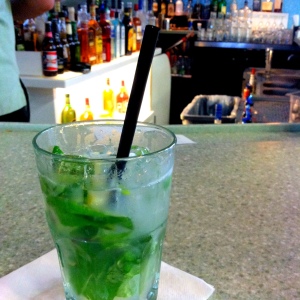 Mojito at the airport.

After lazy days of downing sweet, creamy cortaditos in the morning, sipping mojitos in palm-filled afternoons, ogling the architecture, people watching on Lincoln Road, and seeing the art and the art scene at Art Basel, Pulse, Scope, and Design Miami, we ended the long weekend with a decidedly unglamorous 10-hour stay at Miami International Airport. Where to eat: elsewhere. Where not to eat: Shula’s. If you must eat: Versailles. Where to drink: Islander Bar & Grill by Gate D4 (order a mojito, make it a double). Sometimes, there’s no place like home.