Whatever Happened to Taco Salad? 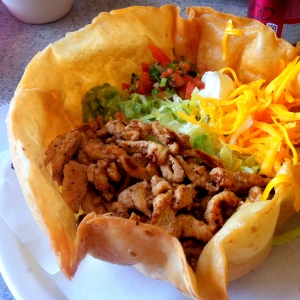 Food trends change, no doubt about it.

When I was seven, my parents took me to France and the Basque Country of northern Spain. It was my first trip abroad, and it was a big deal. When I got back to Richmond, my teacher asked me to tell the class a little about my trip. I recounted how, in San Sebastian, we had bounced from tapas bar to tapas bar all night long. That afternoon, my parents were called into the director’s office and chastised for taking me to topless bars.

Now you can get small plates at Olive Garden.

Flavor combinations definitely have their time. You associate fondue with the 1970s and Jello salad with the 1950s and 60s. The other night, a dining companion and I shared a bowl of pasta in a spicy cream sauce with a crabcake on top. We remarked how 1990s the dish was, by which I suppose we meant it harkened back to the glory days of fusion instead of mimicking the present-day aesthetic of reinventing classics à la bacon and gorgonzola macaroni and cheese or corndogs with whiz. 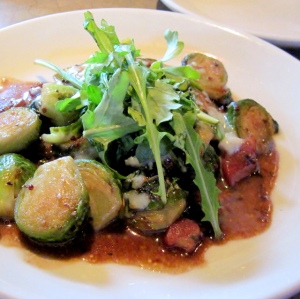 And so, at dinner the other night at a very nice restaurant, the conversation turned suddenly to taco salad.

Now by taco salad, I don’t mean a salad with tortilla chips crumbled over it. No, I mean the entrée-sized salad your mother used to order in decent restaurants, the one that came in the huge deep-fried tortilla bowl. You remember it. Sure, Taco Bell has it (and has since the mid-1980s), but I remember being able to find it in any number of middle-brow restaurants, not even just the Tex-Mex ones. Hell, in 1984, even New York Magazine called the taco bowl at Rockefeller Center’s American Festival Café “witty” and “chic.” I dare any serious food critic to try that today.

But the quality of food is subjective. What’s elegant in one time is déclassé in another. Back in January, BuzzFeed published a list of 21 Truly Upsetting Vintage Recipes. My guess is they weren’t so upsetting back in 19-whenever. Even the Clapper seemed useful and inventive once upon a time.

I remember when Brussels sprouts were a vegetable none of the other kids liked, back before, in the Wall Street Journal’s words, they “broke out.” Back before Kim Alter fried them up and “tosse[d] them in garlic confit, lime juice and a savory onion caramel” and “garnishe[d] them with mint and Aleppo pepper.” Back before Michael Chiarello “tosse[d] shaved sprouts with a flurry of sieved hard-boiled egg, Marcona almonds and a citrus vinaigrette for an elegant salad.” 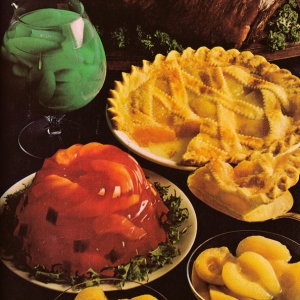 I remember when cupcakes were something you made from a box – though the cupcakery’s days may be numbered – and ramen was the old donburi. I’m too young for Green Goddess salad dressing, perhaps, but I remember my parents’ fascination at its inclusion at the riverboat-shaped salad bar at the opulent, over-the top, sadly now-demolished Tom Sarris’ Orleans House in Rosslyn. And who can forget the so-called Polynesian menus of tiki restaurants past – the gratuitous lychees and pineapple, the tiny umbrellas, and the fried duck bits in an electric-red sauce?

2014, it seems, will be all about upscale Mexican and upscale/regional Italian, microdistilleries, more chefs cooking invasive species, and chefs owning full-scale farms. 2013 was totally different. And 2012? Who remembers.

So whatever happened to the taco salad? God only knows. For whatever reason, it went the way of Watergate salad and Celery Victor before that. But maybe, just maybe, if we wait long enough, we’ll be able to someday order another taco salad in a decent-enough establishment. What goes around, comes around – that sort of thing. After all, if Spike Jonze’s Her is to be believed, we’re quickly barreling back toward Asian fusion. And who’s to say we’re not?