Back When We Ate Roses 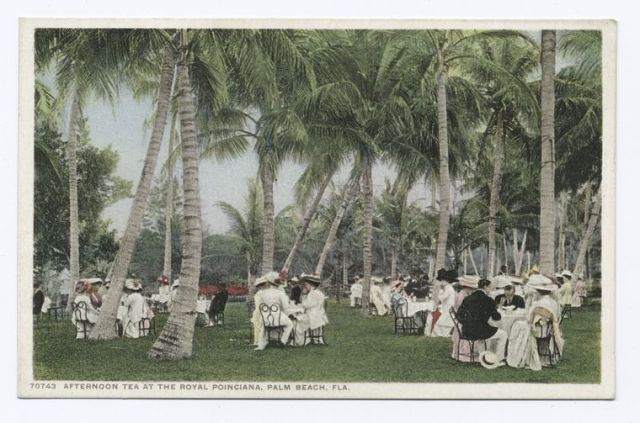 Around 1891, Miss Winnifred and “little Gladys” led S. T. Sherman, a writer for Philadelphia’s Table Talk magazine, into the stone dairy of Elmswood House in Devon, England. There, Betty, the maid, stood filling a china tureen with clover. Inside the clover rested a pat of butter wrapped in cloth. Beside it, in a stone jar, clover blossoms enveloped a cloth-wrapped loaf of bread. There they sat until, when ready, the clover-scented bread was sliced thinly and spread with the clover-scented butter. “They came to the senses,” Sherman wrote, “like the breath of calves and the scent of new-mown hay at dew-fall.”

All through the summer, the ladies of Elmswood House took their five o’clock tea with sandwiches perfumed with clover one day and roses, violets, honey locust, orange blossom, apple blossom, cowslip, or nasturtium the next. These they called “esthetic sandwiches.” Embroidered tea cozies illustrated the flower of the day. The scented butter was supposedly an ancient French peasant technique rediscovered, by accident, when two ladies returned from a country visit with pink roses and fresh butter and left them together in the ice chest. Whatever their origin, the sandwiches were ambrosial, Sherman waxed, diaphanous, dainty, and almost ethereal. 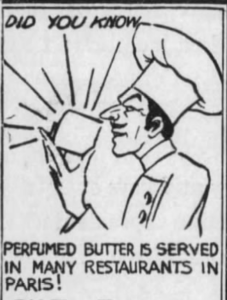 A year later, in the spring of 1892, a short wire article began appearing in big city and small town newspapers across America. “Philadelphia,” it told, “comes to the front in refined gastronomics. The latest idea is perfumed butter.” Pats of butter, it said, were stamped with a floral device, wrapped in cheese cloth, and encased in roses, violets, and carnations. They were eaten for breakfast with crisp Vienna rolls, “the only accompaniment being a cup of fragrant chocolate or steamed mocha.” Perfumed butter, it was reported, “graced the table of millionaires and railroad magnates.”

Home cooks added perfumed butter to cakes and pies. Cookbooks, like Eva Green Fuller’s The Up-to-Date Sandwich Book, Marion Harris Neil’s Salads, Sandwiches, and Chafing Dishes, and Mary Dawson and Emma Paddock’s The Book of Parties and Pastimes instructed home entertainers to cut Graham bread or white bread into strips, circles, and fanciful heart shapes with a layer of perfumed butter, and perhaps a few rose petals peeking out, between them. Drunk with coffee, they were “food fit for the gods.” They were called Rose-Leaf Sandwiches or Rose Petal Sandwiches. Other recipes spoke of sandwiches filled with violets, clover, and nasturtium flowers. 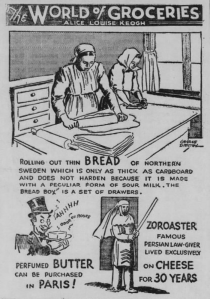 “Have you had any perfumed butter for breakfast yet?” The Critical Woman asked in the New York Evening World. “I hope not, as I also sincerely hope that you have not been obliged to unctuate your æsophagus with the opodeidoc-flavored oleomargarine that many boarding-houses thrust upon their victims.” As the papers advised, the fashionable hotels had begun to serve the perfumed butter with crisp Vienna rolls. Even served with hot chocolate, “I would have had to spray it with carbolic acid to get it past my olfactories and within reach of my masticatories,” she wrote. “I don’t like perfumed butter myself, no matter how sweetly welcome to the smelling sense the flower-breath it carried. Eating it would arouse hostilities between my palate and the corrugated membrane of my proboscis. I couldn’t go it any more than I could swallow a salad made of Smyrna rugs and smilax.”

By 1896, the same brief story again appeared in papers across America, though replacing Philadelphia with the “dainty tables in London.” It was the “new indulgence of the royal family and the rich set,” the papers said. Queen Victoria had even granted a royal warrant to its “discoverer,” making him, whoever he was, Her Majesty’s official purveyor of perfumed butter and apparently a very rich man indeed. The Montgomery Advertiser was not amused. “We fail to discover anything new in it,” it wrote. “‘Perfumed butter’ can be found at any grocery store and at most boarding houses. Some folks do not like the perfume, but that is all a matter of taste, or smell.” 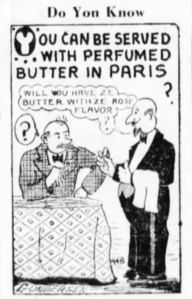 Perfumed butter resurfaced in earnest in the 1920s and 1930s, when it was now rediscovered as a Parisian fad apparently entirely forgotten in America. It was, one paper wrote, a “dainty dish for the descendants of those noble ones who originated the ‘let ‘em eat cake’ jest.” In 1936, Walter Winchell quipped, “In Paris they sell perfumed butter. Makes it smell butter.” Ripley’s copycat cartoons, like Alice Louise Keogh’s The World of Groceries, asked their readers if they knew they could purchase perfumed butter in Paris. As the world descended into global war, and Hitler marched down the Champs-Elysées, the fad received increasingly sporadic mention before drooping and dying like a late autumn rose. Scattered references appeared in a few flower books and magazines, and in newspapers in 1950 and 1978. As time marched on, America had finally lost its taste for esthetic sandwiches.